While it’s been by other companies for other purposes, GoGORILLA Media, a New York based guerrilla marketing firm, has been employing homeless people in an effort to promote its services to advertising agencies. Several homeless men and women have been spotted outside New York advertising agencies holding a hand-scribbled sign which explains their plight. Right next to the sign is a box full of GoGORILLA brochures. While one would wish there to be no homeless people in the world, one hopes, for GoGORRILLA’s reputation, these sign holders really are homeless and not paid interns made to look homeless. 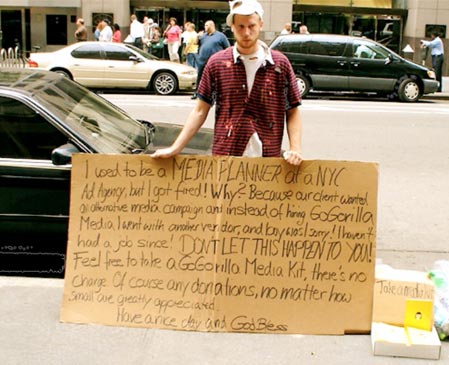 GoGORILLA President Alan Wolan explains, „Sure, it may be a bit self serving, but putting money in the pockets of the homeless is nothing to be ashamed of. This is a socially responsible campaign which allows us to reach key media personnel in a thoroughly unique and effective manner.“

The sign reads: „I used to be a media planner at a NYC ad agency but I got fired! Why? Because our client wanted an alternative media campaign and instead of hiring GoGORILLA Media, I went with another vendor, and boy was I sorry! I haven’t had a job since. Don’t let this happen to you! Feel free to take a GoGORILLA Media Kit, there’s no charge. Of course, any donations, no matter how small, are greatly appreciated. Have a nice day and God bless.“